Matthew has a number of issues that calls its credibility into question. First, introductory notes about Matthew are provided relating to the source material, authorship, and structure. The Farrer theory provides additional rational for holding Matthew with increased skepticism considering the likelihood that Luke excluded much of the content from Matthew. Major contradictions of Matthew with other Gospel accounts are shown in the following section. Most of the contradictions in the New Testament are Matthew conflicting with Mark, Luke, and John. Other issues with Matthew are described in terms of problematic passages and inconsistent language including passages used for Judaizing Christians and used by Muslim apologists. Finally, evidence is provided against the traditional wording of Matthew 28:19 that indicates the trinitarian baptismal formula was added later and is not original to Matthew.

The Gospel of Matthew was written after the Gospel of Mark was written and likely before 70 A.D.[1] (the year of the destruction of the Temple in Jerusalem). Matthew is clearly dependent on Mark for much of its content since 95% of the Gospel of Mark is found within Matthew and 53% of the text is verbatim (word-for word) from Mark. The Gospel is attributed to Matthew because of the presumption that some of the unique source material may had come from Matthew (a disciple of Jesus who was previously a tax collector) although most of the source material is from the Gospel of Mark as many see it is an embellishment upon Mark. What is clear is that Matthew is the combination of source materials rather than that of a single disciple or source. The attribution on the Gospel “according to Matthew” was added latter. Evidence of Church father’s attribution to Matthew extends to the second century.

Matthew is not structured like a chronological historical narrative. Rather, Matthew has alternating blocks of teaching and blocks of activity. Matthew is an artificial construction embodying a devised literary structure with six major blocks of teaching. The author is likely a Jewish follower of Jesus that was not comfortable using the word “God”. For example, the author circumvents using the word “God” by employing the phrase “Kingdom of Heaven” numerous times as opposed to “Kingdom of God” as is used in Mark and Luke. Matthew also raises some issues that only early Jewish Christians would be concerned with. Some scholars believe that Matthew was originally written in a Semitic language (Hebrew or Aramaic) and was later translated into Greek. It is possible that there were versions of Matthew both in Hebrew (or Aramaic) in addition to the Greek. These versions may have varied with respect to each other. The earliest complete copy of Matthew that remains is from the fourth century.

Farrer Theory as a basis for increased skepticism toward Matthew:

The Farrer hypothesis (also known as the Farrer-Goulder-Goodacre hypothesis) is the theory that the Gospel of Mark was written first, followed by the Gospel of Matthew and then the author of the Gospel of Luke used both Mark and Matthew as source material. This was advocated by English biblical scholars including Austin Farrer, who wrote On Dispensing With Q in 1955[2], and by other scholars including Michael Golder and Mark Goodacre.[3] The Farrer theory has the advantage of simplicity, as there is no need for hypothetical source “Q” to be created by academics. Advocates of the Farrer theory provide strong evidence that Luke used both the previous gospels (Mark and Matthew) and that Matthew predates Luke.[4]

The insistence on a missing source “Q” stems largely from an assumption that the author of Luke would not have excluded so much of Matthew if he had access to it as a source. However, the author of Luke recognized that there were many narratives before him. His prologue suggests the need, based on his close review of the witnesses, to provide an orderly account for the purposes of providing certainty about the things taught. This implies is that Luke excludes much of Matthew because Matthew largely got things wrong. Another objection to the Farrer Theory is that Luke is more abbreviated in some passages than Matthew and therefore Luke reflects a more primitive text. However if Luke intends to provide a concise and orderly account, it is more likely the case that Luke edited out “the fluff” from the passages in Matthew based on what he believed was most creditable and substantiated attestation of the evidence within his possession. The author of Luke’s expresses this motivation in his prologue:

Primary arguments for believing that the author of Luke had access to both Mark and Matthew prior to authoring Luke are as follows: 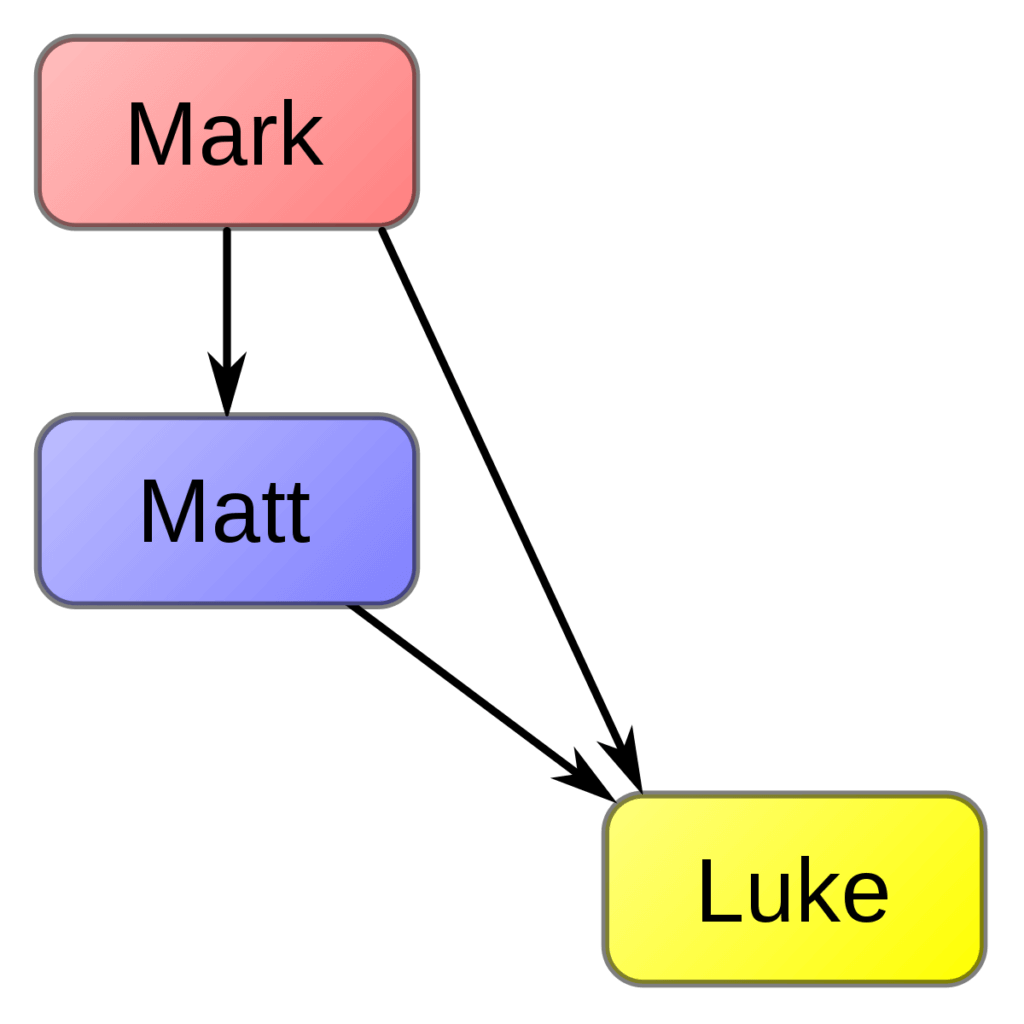 Founder of Integrity Syndicate
View all posts by Theophilus Josiah

We use cookies on our website to give you the most relevant experience by remembering your preferences and repeat visits. By clicking “Accept All”, you consent to the use of ALL the cookies. However, you may visit "Cookie Settings" to provide a controlled consent.
Cookie SettingsAccept All
Manage consent

This website uses cookies to improve your experience while you navigate through the website. Out of these, the cookies that are categorized as necessary are stored on your browser as they are essential for the working of basic functionalities of the website. We also use third-party cookies that help us analyze and understand how you use this website. These cookies will be stored in your browser only with your consent. You also have the option to opt-out of these cookies. But opting out of some of these cookies may affect your browsing experience.
Necessary Always Enabled
Necessary cookies are absolutely essential for the website to function properly. These cookies ensure basic functionalities and security features of the website, anonymously.
Functional
Functional cookies help to perform certain functionalities like sharing the content of the website on social media platforms, collect feedbacks, and other third-party features.
Performance
Performance cookies are used to understand and analyze the key performance indexes of the website which helps in delivering a better user experience for the visitors.
Analytics
Analytical cookies are used to understand how visitors interact with the website. These cookies help provide information on metrics the number of visitors, bounce rate, traffic source, etc.
Advertisement
Advertisement cookies are used to provide visitors with relevant ads and marketing campaigns. These cookies track visitors across websites and collect information to provide customized ads.
Others
Other uncategorized cookies are those that are being analyzed and have not been classified into a category as yet.
SAVE & ACCEPT