Following the Apostles Doctrine (Acts 2:38) and the Unitarian belief in one God, the Father, and one Lord, Jesus Christ (1Cor 8:5-6)

Apostles Doctrine: Repentance, baptism in Jesus name, and the gift of the Holy Spirit 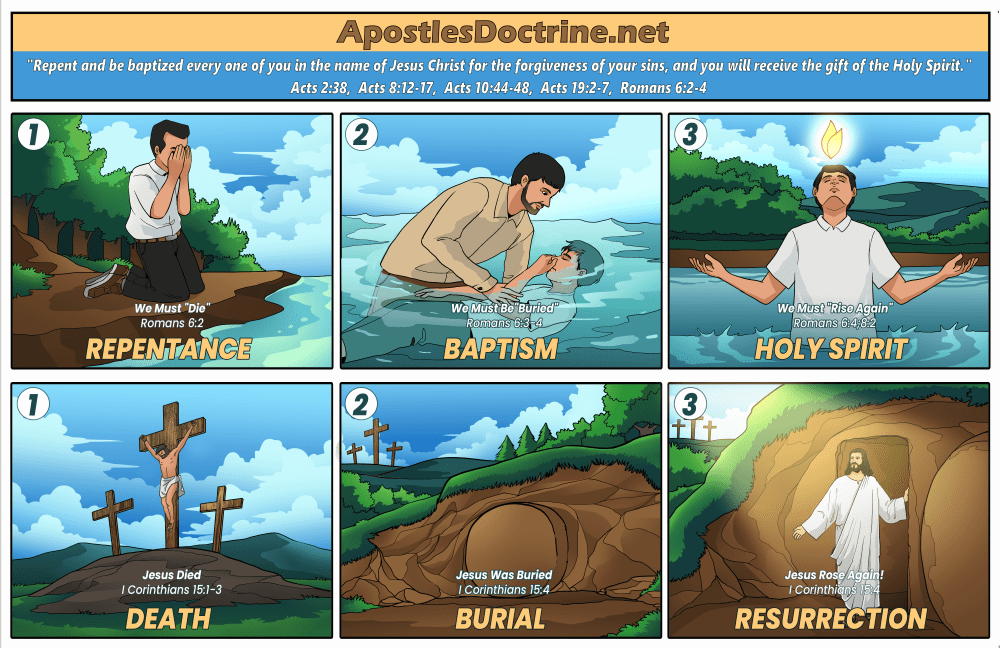 “Let all the house of Israel therefore know for certain that God has made him both Lord and Christ, this Jesus whom you crucified.” Now when they heard this they were cut to the heart, and said to Peter and the rest of the apostles, “Brothers, what shall we do?”  And Peter said to them, “Repent and be baptized every one of you in the name of Jesus Christ for the forgiveness of your sins, and you will receive the gift of the Holy Spirit. For the promise is for you and for your children and for all who are far off, everyone whom the Lord our God calls to himself.” And with many other words he bore witness and continued to exhort them, saying, “Save yourselves from this crooked generation.” So those who received his word were baptized…

But when they believed Philip as he preached good news about the kingdom of God and the name of Jesus Christ, they were baptized, both men and women. Even Simon himself believed, and after being baptized he continued with Philip. And seeing signs and great miracles performed, he was amazed. Now when the apostles at Jerusalem heard that Samaria had received the word of God, they sent to them Peter and John, who came down and prayed for them that they might receive the Holy Spirit, for he had not yet fallen on any of them, but they had only been baptized in the name of the Lord Jesus. Then they laid their hands on them and they received the Holy Spirit.

While Peter was still saying these things, the Holy Spirit fell on all who heard the word. And the believers from among the circumcised who had come with Peter were amazed, because the gift of the Holy Spirit was poured out even on the Gentiles. For they were hearing them speaking in tongues and extolling God. Then Peter declared, “Can anyone withhold water for baptizing these people, who have received the Holy Spirit just as we have?” And he commanded them to be baptized in the name of Jesus Christ…

And he said to them, “Did you receive the Holy Spirit when you believed?” And they said, “No, we have not even heard that there is a Holy Spirit.” And he said, “Into what then were you baptized?” They said, “Into John’s baptism.” And Paul said, “John baptized with the baptism of repentance, telling the people to believe in the one who was to come after him, that is, Jesus.” On hearing this, they were baptized in the name of the Lord Jesus. And when Paul had laid his hands on them, the Holy Spirit came on them, and they began speaking in tongues and prophesying. There were about twelve men in all.

“For Christ also suffered once for sins, the righteous for the unrighteous, that he might bring us to God, being put to death in the flesh but made alive in the spirit, in which he went and proclaimed to the spirits in prison, because they formerly did not obey, when God’s patience waited in the days of Noah, while the ark was being prepared, in which a few, that is, eight persons, were brought safely through water. Baptism, which corresponds to this, now saves you, not as a removal of dirt from the body but as an appeal to God for a good conscience, through the resurrection of Jesus Christ, who has gone into heaven and is at the right hand of God, with angels, authorities, and powers having been subjected to him. “

“Do you not know that all of us who have been baptized into Christ Jesus were baptized into his death? We were buried therefore with him by baptism into death, in order that, just as Christ was raised from the dead by the glory of the Father, we too might walk in newness of life.”

“In him also you were circumcised with a circumcision made without hands, by putting off the body of the flesh, by the circumcision of Christ, having been buried with him in baptism, in which you were also raised with him through faith in the powerful working of God, who raised him from the dead. And you, who were dead in your trespasses and the uncircumcision of your flesh, God made alive together with him, having forgiven us all our trespasses, by canceling the record of debt that stood against us with its legal demands. This he set aside, nailing it to the cross.”

“Because of this, we should leave the starting point of the word of Christ and we should come to maturity. Or will you again lay another foundation for repentance from dead works and for the faith that is in God and for the doctrine of baptism and of the laying on of  hands and for the resurrection from the dead and for eternal judgement?  If the LORD permits, we will do this. But they are not able, those who once have gone down into baptism and have tasted the gift that is from heaven and have received the Holy Spirit and have tasted the good word of God and the power of the age that is to come, to sin again and to be renewed to repentance from the beginning and to crucify to disparage the Son of God from the beginning. For the earth, which drinks the rain that comes to it many times and produces the green herb that is useful to those because of whom it was cultivated, receives a blessing from God. But if it produces thorn and thistles, it is rejected and is not far away from a curse, but rather its end is fire.” 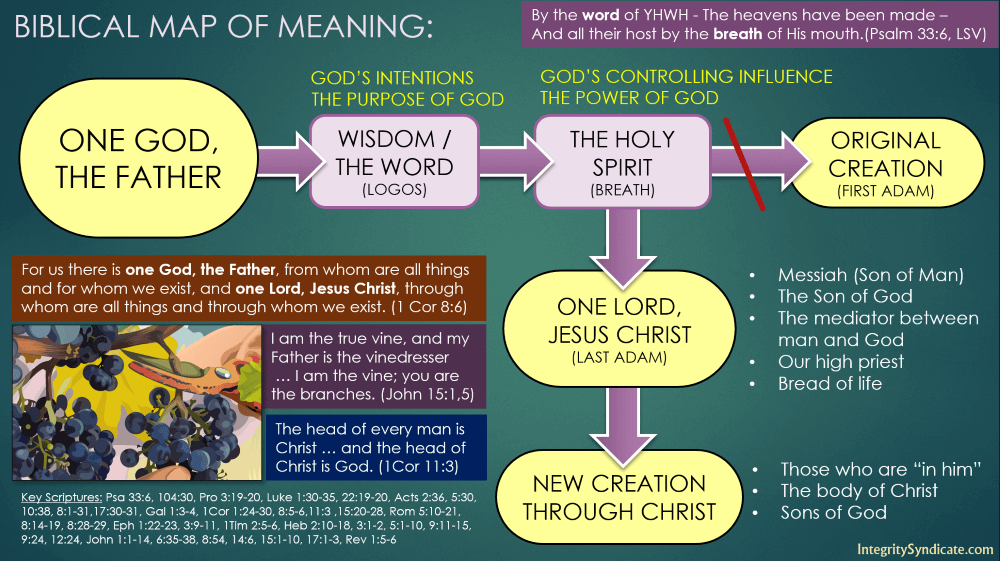 Unitarian Theology: There is one God, The Father, and one Lord, Jesus Christ

“For there is one God, and there is one mediator between God and men, the man Christ Jesus, who gave himself as a ransom for all, which is the testimony given at the proper time.”

“The God of Abraham, the God of Isaac, and the God of Jacob, the God of our fathers, glorified his servant Jesus, whom you delivered over and denied in the presence of Pilate, when he had decided to release him…God, having raised up his servant, sent him to you first, to bless you by turning every one of you from your wickedness.”

“The God of our fathers raised Jesus, whom you killed by hanging him on a tree. God exalted him at his right hand as Leader and Savior, to give repentance to Israel and forgiveness of sins.”

“The times of ignorance God overlooked, but now he commands all people everywhere to repent, because he has fixed a day on which he will judge the world in righteousness by a man whom he has appointed; and of this he has given assurance to all by raising him from the dead.”

“Therefore, holy brothers, you who share in a heavenly calling, consider Jesus, the apostle and high priest of our confession,  who was faithful to him who appointed him, just as Moses also was faithful in all God’s house.”

For every high priest chosen from among men is appointed to act on behalf of men in relation to God, to offer gifts and sacrifices for sins. He can deal gently with the ignorant and wayward, since he himself is beset with weakness. Because of this he is obligated to offer sacrifice for his own sins just as he does for those of the people. And no one takes this honor for himself, but only when called by God, just as Aaron was. So also Christ did not exalt himself to be made a high priest, but was appointed by him who said to him, “You are my Son, today I have begotten you”

“For Christ has entered, not into holy places made with hands, which are copies of the true things, but into heaven itself, now to appear in the presence of God on our behalf.”

“And being found in human form, he humbled himself by becoming obedient to the point of death, even death on a cross. Therefore God has highly exalted him and bestowed on him the name that is above every name, so that at the name of Jesus every knee should bow, in heaven and on earth and under the earth, and every tongue confess that Jesus Christ is Lord, to the glory of God the Father.”

“Grace to you and peace to you from God our Father and the Lord Jesus Christ, who gave himself for our sins to deliver us from the present evil age, according to the will of our God and Father, to whom be the glory forever and ever. Amen.”

“… from Jesus Christ the faithful witness, the firstborn of the dead, and the ruler of kings on earth. To him who loves us and has freed us from our sins by his blood and made us a kingdom, priests to his God and Father, to him be glory and dominion forever and ever. Amen.”

Jesus can be called God based on the concept of agency:

Agents of God were called God (although not literally so): 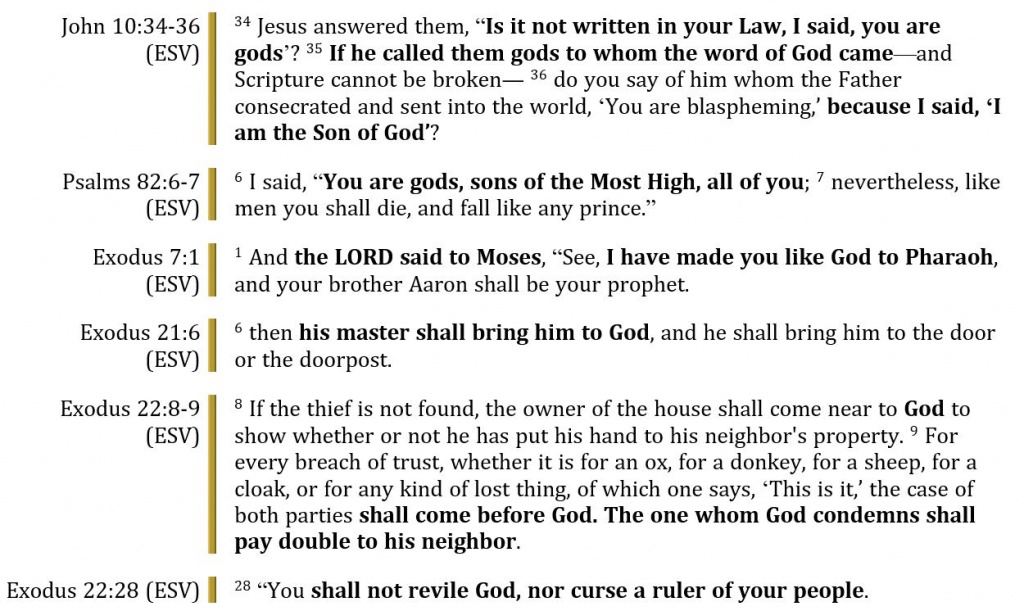 Old Covenant: The one God is both Lord and God

New Covenant: God remains God but has made Jesus both Lord and Christ

“Let all the house of Israel therefore know for certain that God has made him both Lord and Christ, this Jesus whom you crucified.”

For us there is one God, the Father, and one Lord, Jesus Christ

We use cookies on our website to give you the most relevant experience by remembering your preferences and repeat visits. By clicking “Accept All”, you consent to the use of ALL the cookies. However, you may visit "Cookie Settings" to provide a controlled consent.
Cookie SettingsAccept All
Manage consent

This website uses cookies to improve your experience while you navigate through the website. Out of these, the cookies that are categorized as necessary are stored on your browser as they are essential for the working of basic functionalities of the website. We also use third-party cookies that help us analyze and understand how you use this website. These cookies will be stored in your browser only with your consent. You also have the option to opt-out of these cookies. But opting out of some of these cookies may affect your browsing experience.
Necessary Always Enabled
Necessary cookies are absolutely essential for the website to function properly. These cookies ensure basic functionalities and security features of the website, anonymously.
Functional
Functional cookies help to perform certain functionalities like sharing the content of the website on social media platforms, collect feedbacks, and other third-party features.
Performance
Performance cookies are used to understand and analyze the key performance indexes of the website which helps in delivering a better user experience for the visitors.
Analytics
Analytical cookies are used to understand how visitors interact with the website. These cookies help provide information on metrics the number of visitors, bounce rate, traffic source, etc.
Advertisement
Advertisement cookies are used to provide visitors with relevant ads and marketing campaigns. These cookies track visitors across websites and collect information to provide customized ads.
Others
Other uncategorized cookies are those that are being analyzed and have not been classified into a category as yet.
SAVE & ACCEPT